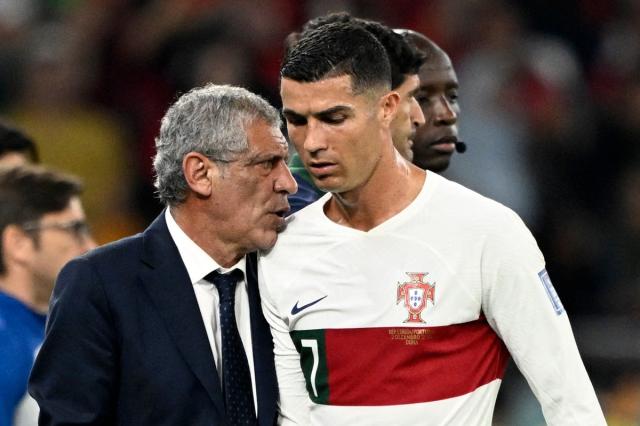 In the World Cup loss to South Korea, Portugal coach Fernando Santos admits he “truly didn’t like” Cristiano Ronaldo’s response after being substituted.

Ronaldo was substituted after having played for 65 minutes into their final group-stage loss and has since denied yelling at his coach.

Santos declined to respond to rumours that Ronaldo would be benched for Tuesday’s play against Switzerland in the round of 16.

Santos stated, “I don’t care if the information is accurate or not.

“I don’t read this kind of material. I’m concentrating on my squad. We are putting all of our efforts into training and not reading any polls [in the Portuguese media].

“Yes, I absolutely disliked Ronaldo’s scream. I truly didn’t like it, and as of that point, the matter is now over.”

“Yes, I absolutely disliked Ronaldo’s scream. I truly didn’t like it, and as of that point, the matter is over.”

The 37-year-old attacker, who parted ways with Manchester United amicably in November following a contentious interview, took up a large portion of the Monday news conference in Portugal.

While several teams have indicated an interest in Ronaldo, the Saudi Arabian big shots Al-Nassr has already made a sizable bid to acquire him after the tournament in Qatar.

A Team Overview: Portugal vs Switzerland

Due to the absence of three of his squad members, Santos will still hope to deploy the strongest team available to face the Swiss. While Paris Saint Germain’s Mendes and Danilo Pereira are out with thigh and rib injuries, respectively, Otavio, a winger for FC Porto, is recuperating from a hamstring injury. Santos has every player he needs available and ready to go, save from that. Ronaldo will undoubtedly be the captain of Portugal’s starting line-up, which easily defeated Uruguay in the group stages.

Switzerland has experience playing in the World Cup Round of 16 stage. This will be their eighth quarterfinal appearance in their twelfth World Cup. The Rossocrociati have made it to this level three times in the last four tournaments. At the 2010 World Cup, they were kicked out at the group stage. The Swiss have recently advanced to the last 16, yet, as in the World Cups of 2006, 2014, and 2018, they were defeated at this level. The Rossocrociati last advanced past the Round of 16 during the event they hosted in 1954.

Injury concerns continue to haunt both the teams although it will affect the Swiss a tad bit more than their opponents as they will play without their talisman stopper Yann Sommer. Portugal will be without the duo of Nuno Mendes and Pereira.

Where to watch and timings: The match will kick off at 12:30 AM IST on Wednesday, December 7, and will be telecasted live on Sports18 and Sports18 HD channels. Fans can also live stream the game online on the JioCinema app available on Google play store and the App store for free.

EXPLAINED: What Argentina needs to do to qualify for FIFA World Cup Round of 16?